Through A Traveller’s Lens: Israel and Palestine

This is purely a reflective piece. I left Israel a few weeks before the recent conflict in Gaza began. As a traveller and human being in this great big world, all I hope to do is learn and grow as I travel. The Israeli-Palestinian conflict is extremely complicated and I am no authority on the matter. This piece was extremely difficult for me to write but ultimately I wanted to write it to give insight on how I was challenged and changed through my travels.

3 months ago, I was questioning myself about whether it was right to travel to Israel. And by right, I mean morally. It’s something I often ask myself before considering travelling to different countries in conflict. Am I, through my travels, inadvertently supporting some kind of regime I completely disagree with?

I was very much ‘pro-Palestine’. From what I knew about the Israeli-Palestinian conflict (which I admit was and still is limited) Israel was in the wrong and Palestine was the party wronged. That was that.

A lot of what I had read, heard about and learned completely supported this notion. Palestine is often represented as the underdog and the only victim in the conflict (to be clear, I’m not here to say it is or it isn’t).

After travelling through some of the area sandwiched between Jordan and Egypt, I realised that my views were pretty skewed by a black and white image painted by articles, news outlets and viral social media content.

We are often asked to pick a side – through imagery, headlines and stories that compel us to judge and condemn. There’s a narrative that we’re asked to buy into and regardless of how objective people try to be, everyone speaks, writes and shares from some kind of bias. If I’m honest, I think meeting a lot of Israelis abroad didn’t help my bias because the many that I did meet came across as very crass and crude. They fit the stereotype I had predetermined and it made sense that they were the “bad guys”.

I carried that bias with me into Israel. I had definitely picked a side.

I met a friend’s uncle in Haifa, a town where Muslims, Jews and Christians coexist fairly peacefully and there is a mix of Palestinians and Israelis. I found this interesting because it certainly wasn’t the story I had been told.

I travelled onwards into Palestine and visited Bethlehem. Here, I faced the infamous Israeli West Bank Barrier. After hearing about the impending wall between the US and Mexico, any wall was, in my mind, completely divisive (both literally and figuratively) and an unnecessary power play. I felt angry and saddened by its existence. There’s an image on the wall that calls it an outdoor prison and I felt the weight of those words as I stood there.

Another friend later told me that he was in an Israeli village that was bombed and that the barrier was absolutely necessary to end a lot of violence. Two sides I can understand and yet it still feels like a lose-lose situation.

I remember sitting in Hebron chatting to a Palestinian friend who lives right outside some Jewish settlements. I asked him who he believes causes him the most suffering. His answer? His government. An Israeli friend said the same about his.

It was then I realised how little I really knew and understood and that decades of history and conflict could not and cannot simply be narrowed down to which country is right and which is wrong. The situations in the Middle East are complicated and complex and I cannot possibly know everything there is to know and grasp all aspects of matters.

Like any good superhero movie, we have a tendency to distinguish sides. After all, there has to be the big bad villain to hate and the underdog to root for, right? In reality, innocent people – both Israelis and Palestinians – suffer as a result of the conflict. It doesn’t matter if the count of one outnumbers the other – they are ALL people and they are dying.

People are dying. There are no winners.

I have met Palestinians and Israelis who have lost family and friends because of this conflict. People who have become the face of a war they don’t agree with. People have friends and family that they don’t get to visit.

With travel comes a better understanding and more of an ability to see the whole picture. I am still reading, learning, listening and asking questions. I now see that things aren’t at all black and white and that each government is responsible for making some disastrous decisions motivated by greed.

Through my time travelling these areas, I felt a lot of inner conflicts and wrestled with my continually changing emotions, thoughts and ideas. Although it would be easy to simply say that one entire group of people is wrong and the other is right, I believe that it only causes more harm and division. Meeting people and travelling revealed a different side of the situation, the only side that perhaps should matter: the human side.

I’ve come to befriend some Israelis and Palestinians and they, like all of us, have so much in common. They just want to live peacefully. They want the freedom to live where they want and go where they please, not having to worry about what passport they hold. They also want that for each other.

There is a lot of convoluted history that pretending to know all of the intricate details and deciding (as a foreigner) who is right or wrong is not possible nor is it my place.

So, after my time in Palestine and Israel, I have decided that I cannot possibly be pro-Palestine OR pro-Israel because either way, people are suffering under the notion that one is right and one is wrong. I am not here to offer solutions and I don’t think there is one that is ever going to appease everyone. What I do hope that the conflict will end so that people can live freely regardless of race or religion.

I welcome your views on this – whether you agree, disagree or otherwise would like to comment. All I ask is that you keep it kind either way. Thank you. 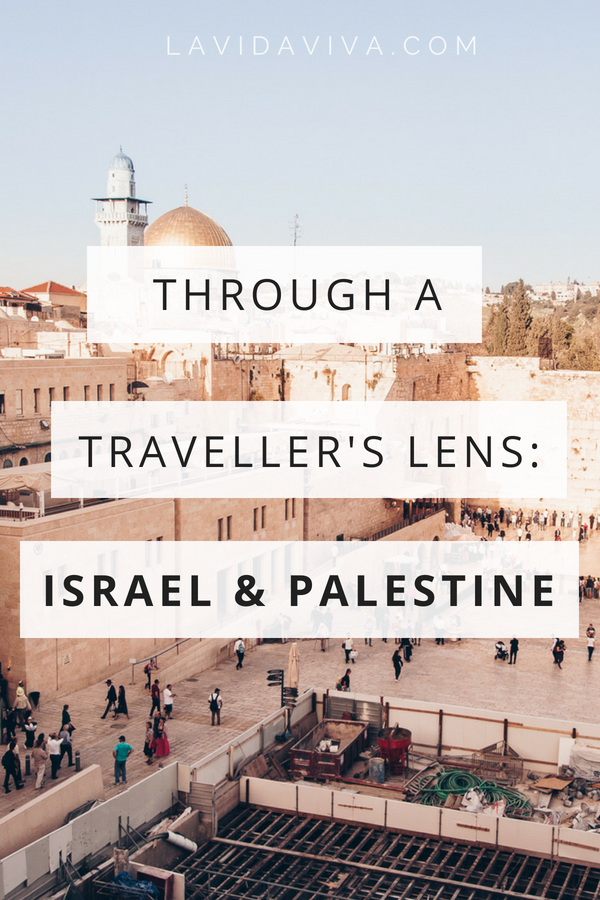 19 thoughts on “Through A Traveller’s Lens: Israel and Palestine”