Cuba was one of the countries I was looking forward to most when we planned our Latin America adventure. Unfortunately for me, while I did enjoy Cuba, I think it could have been a lot better. And it wasn’t Cuba’s fault, it was mine. Daniel and I came unprepared and made many mistakes. Bad for us but good news for you because hopefully you can learn from our mistakes and have an awesome time. Alas, we’d like to present to you our 15 Travel Tips for Cuba (and all the lessons learned for the next time).

1. Research and plan ahead

Spending 6.5 months in Latin America can make you a bit cocky. When we first started travelling, we did a fair bit of planning – never in too much detail but an idea of the main cities or towns we’d visit and we’d tweak as we’d go along. By the time we got to Central America, we pretty much winged it all.

For most people, the language barrier is half the battle. So when we arrived in Cuba and could speak Spanish, we didn’t think that it’d be much of a problem just winging it. Wrong. Oh so so so wrong. We arrived in Cuba with nothing more than a casa booked in Havana which meant our week there was not spent wisely and neither was our money.

Wifi is limited and can sometimes be a hassle to access so if you have favourite blogs (like ours – shameless plug), just save it to iBooks or something equivalent on your phone so you can access it when offline. Pick up a guidebook and really plan ahead.

A couple told me about a tour you could pre-book with a driver in Havana who was a part of the Cuban Revolution. He takes you to all the significant sights, gives you the interesting facts and shares personal experiences. Definitely, something I wish I knew about beforehand!

In our 1 week, we squeezed in Havana, Viñales and Trinidad. Throw in on top of that a flight delay and long bus rides, we effectively had 2 days in each city. So rather than enjoying any place fully, we felt like headless chickens, rushing the entire time and actually missed out on so much.

My recommendation is (again) plan ahead. Pick where you want to go, what you’re going to do there and even look into some interesting tours (and make note of contact details). There is so much to see and do so you will enjoy yourself much more if you take your time.

3. Spend a day in Centro Habana

Or if you’re up to it, just stay here during your time in Havana. Centro Havana is midway between Habana Vieja (Old Havana) and Vedado but far less touristy. It may feel like a bit of a sketchy neighbourhood but you shouldn’t have any problems.

Centro Havana is filled with old, run-down buildings that haven’t been restored (unlike Old Havana), street vendors, people playing music and dancing in the streets. You’ll see a lot of people sitting outside their houses or standing on balconies enjoying people watching or chatting with their neighbours. This was also one of my favourite activities. Also, if you like to dance, this is the place to be since a lot of the dance clubs are here.

4. Bring plenty of cash and only in selected currencies

You can’t pay by card in most places in Cuba so you will need to bring plenty of cash to exchange. The following currencies are accepted in Cuba: Canadian Dollar (CAD), Swiss Franc (CHF), Euro (EUR), British Pound (GPB), Japanese Yen (JPY), Mexican Pesos (MXN) and the US Dollar (USD). However, if you exchange the USD, you are penalised 10-15% so you will save money by exchanging with any of the other currencies prior to coming to Cuba.

Bring more than you think is enough and some extra for emergencies. There are ATMs but US Bank cards are NOT accepted. This includes Citibank for any Aussies who use it. It’s better to bring more than enough cash (in the correct currency) and change back anything unused.

Note: Cuba has a dual currency system – pesos national (CUP) and pesos convertibles (CUC). 1CUC is 25CUP so you really need to check your banknotes. The CUP banknotes have national heroes printed on them and the CUC have national monuments. The CUC is tied to the US dollar and is what most things will be charged in.

5. Change money at the airport

Up until I travelled to Cuba, my blanket rule was to never change money at the airport because the exchange rate is always significantly lower. However, the exchange rate at the airport in Cuba was the highest rate we received the entire time. Since you’re already going to be waiting in line for a while, just exchange as much you as think you’ll need to avoid finding a bank or casa de cambio to exchange more (opening times and lines are always a pain).

6. Stop by the bus terminal after leaving the airport

Viazul, the main tourist bus company, is on the way from the airport to Centro or Old Havana so ask your taxi driver to stop here so you can buy your bus tickets to your next city/town. Bus tickets can only be purchased in person so save yourself the return taxi trip to the terminal.

7. Stay in a casa particular

You pretty much have 2 main options for accommodation in Cuba: hotels or casa particulares. A casa particular is a person’s house. You stay in a private room, usually with a private bathroom and air conditioning but won’t have access to the kitchen (maybe if you ask nicely). Make sure to lock any valuables away carefully (we know someone who had money taken from their room).

When you are staying at your first casa, your host will likely ask you where you’re going next and tell you that their friend/cousin/sister/uncle has a casa there too. I get it, it’s hard to say no when you’re staying at someone’s house and they really try to push you to book there and then.

Here’s the thing, everyone has a casa these days so it is so much cheaper to show up at the bus terminal and pick one of the places being waved around in your face (except for Havana, you should have a place booked in advance). You can also negotiate prices. To put it in perspective, we paid 30CUC in Havana without breakfast, 20CUC in Viñales without breakfast and 15CUC in Trinidad with breakfast (all prices for 2 people).

8.  Cuba is not cheap, especially not for tourists

And especially if you’re travelling solo. Casa prices are usually for the room, regardless if you’re staying alone. You should have some success in bargaining the prices down but these instances are when a travel buddy comes in handy. Restaurants aren’t cheap with most meals in restaurants costing on average 10CUC each plus tips. If your casa offers meals then you might save money by eating there instead. Having a home cooked meal is always so much nicer too!

9.  And with that, nothing comes free!

We met so many lovely and helpful strangers in our 6 months in Latin America. Most people just wanted to help out and make things easier for us. For example, in San Salvador, we were dropped off in the wrong place for a bus we needed to catch.

A local man could see that we were confused and walked with us to the correct stop about 10 minutes away. If we asked locals for tips of things to do or places to see, there was rarely ever a catch. They would make recommendations or show us and leave it at that. We found that Cubans were very friendly but almost every time, they would ask for money in the end.

Take this man who approached me and said “where are you from? Let’s take a photo!” I genuinely thought he was a guard, Daniel took the photo and then he told us we had to pay him for the picture.

10. Bring a phrasebook or learn some basic Spanish

Although there is a fair bit of English spoken in Cuba, knowing some basic Spanish will:
a) Make things less awkward at your casa given many hosts don’t speak English
b) Help you to bargain prices (taxis, shopping etc)
c) Help you get around in smaller towns where there is less English being spoken.

The tourist buses are very comfortable, have air-conditioning and make several meal and toilet stops along the way.

12. Take collectivos for trips under 4-5 hours

A collectivo is a shared taxi. The price of a collectivo is usually the same as the bus ticket but it will get you there faster and straight to your destination. However, you obviously don’t get as much leg and seat room as a bus so we recommend this option if you’re travelling under 5 hours for the sake of comfort.

One of the best things about Cuba is that internet isn’t widely available. You’ll especially notice this in busy neighbourhoods because people aren’t glued to their phones and instead are hanging out on the streets together!

14. But if you really need to connect…

Wifi is generally available in select locations (such as main plazas in smaller towns) and hotels. You need to buy a wifi card (2CUC per hour) from ETECSA telecommunications. This is usually the building with a long line out front. If you can’t be bothered waiting at the building, you will also find guys on the street reselling the cards for 3CUC per hour.

15. Have your camera ready!

Cuba is filled with great photo opportunities. As you’re walking through the streets, you’ll see cars, buildings and people that you’ll want to photograph. And that could all be within 5 minutes of leaving your casa! You won’t miss the beautiful vintage cars in pristine condition but note that if you want a ride in some of the fancier models, you’ll be forking out a fair bit.

So there we have it, our 15 tips for Cuba travel. We’d love to hear some of your experiences or what you think in the comments below. For anyone travelling solo to Cuba, also check out See Her Travel’s advice on solo travel! Also, to help with budgeting, see what our friend, Flight of the Educator spent in her Cuba budget. 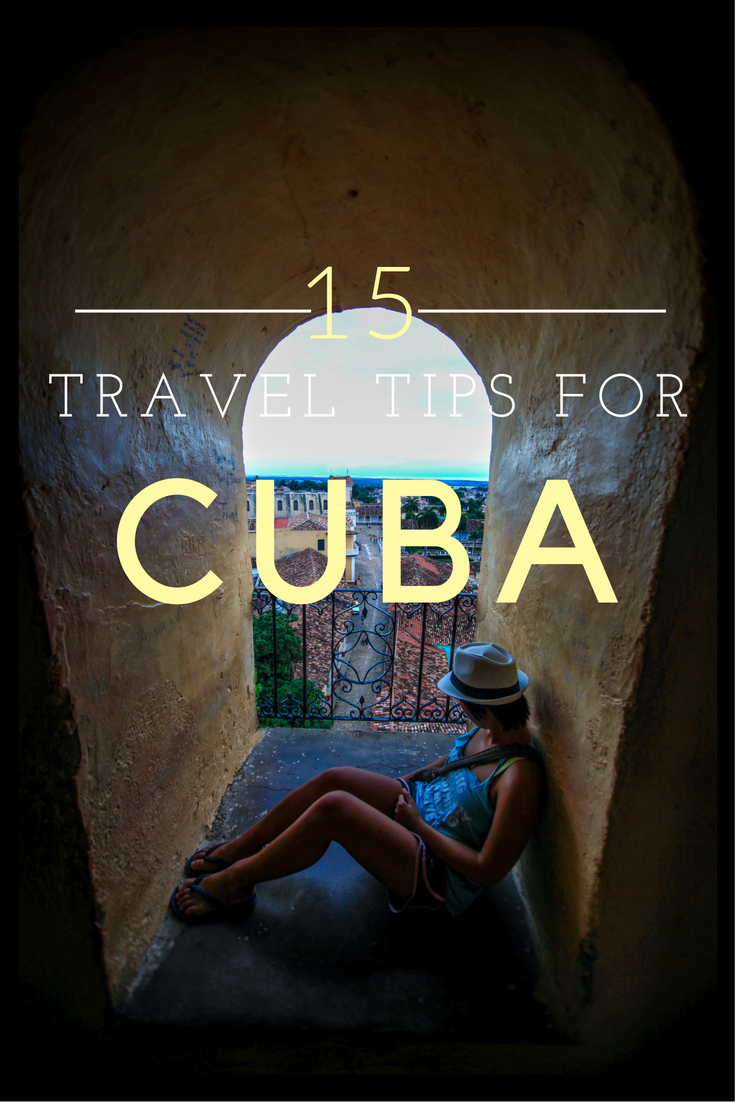