8 Reasons to Swim With Whale Sharks In The Ningaloo Reef, Australia

When Daniel and I were planning our Philippines trip, I noticed that one of the most popular activities is a swim with whale sharks. What I quickly realised though is that many places that offer this activity are more interested in attracting tourists than in the vitality of the whale shark. So Daniel and I decided that this was an activity we’d save to do in Australia.

It seems unreal that just a couple of months ago I was swimming alongside the largest fish in the ocean. The idea of it was both exciting and a little scary – I don’t think I’ve ever seen anything bigger than a ray in the ocean before. But watching the peaceful shark glide through the water put all my anxieties at ease and all that was left was complete awe.

But first, what’s a whale shark?

The Rhincodon typus or Whale Shark is a filter feeding fish with a flattened head and a blunt snout above its mouth. Whale sharks aren’t related to whales and although they are sharks, are completely docile and pose no threat to humans. The largest confirmed whale shark had a length of 12.65m (41.5ft) and a weight of about 21,500kg (47,000lb)!!

There are many places in the world that famously advertise swims with whale sharks but the Ningaloo Reef is arguably the best place to do it. Here’s why.

1. It is heavily regulated by the Australian government

Most Aussies will complain that Australia is a nanny state because of all its strict laws and regulations. This is a prime example of why nanny state regulations work. The number of licenses held to operate whale shark tours is currently capped at 15 between Coral Bay and Exmouth (over 150 km stretch). This means that not every boat owner can run a business selling whale shark swims to tourists. All the strict rules and regulations are there to protect the whale sharks and ensure that swimmers also have an enjoyable experience.

Unfortunately, this isn’t the case with many other places around the world. 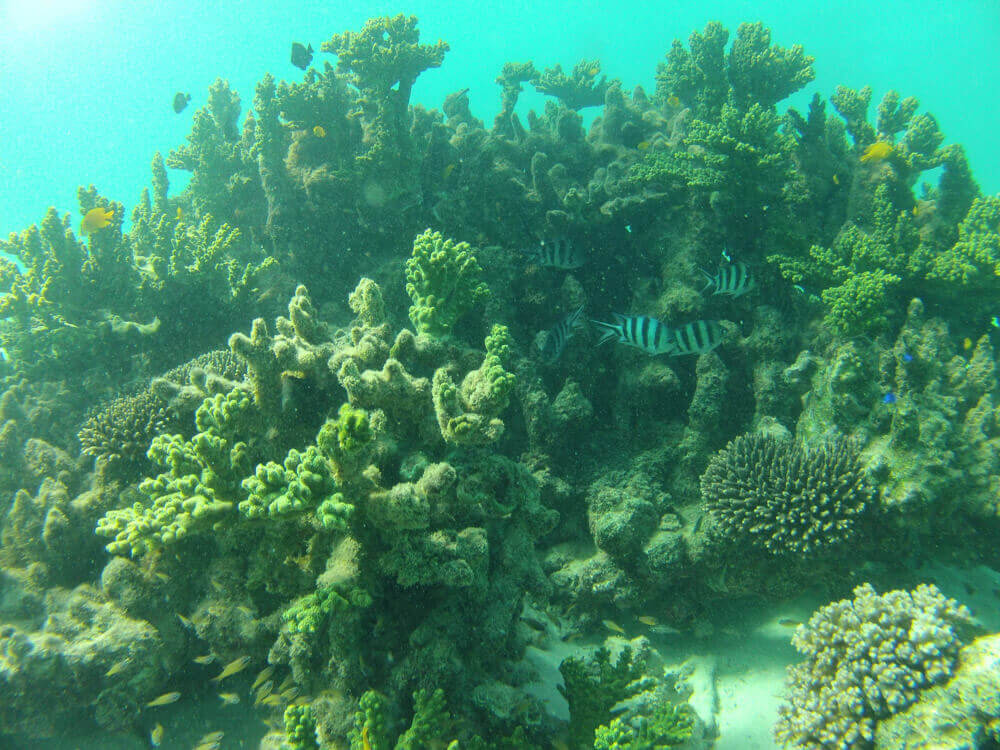 2. Whale sharks aren’t fed or baited – they come to the Ningaloo Reef as part of their natural migration pattern.

Did you know that naturally, whale sharks can migrate over thousands of kilometres a year? Since they prefer warm waters, they populate all tropical seas and are known to migrate every year to the continental shelf of the central west coast of Australia. The Ningaloo Reef provides an abundant supply of plankton (their favourite food) and whale sharks start visiting the Aussie waters from March through to August.

3. Only 10 people can be in the water with one whale shark at any given time.

I love this rule. I’ve heard of other experiences where swims aren’t regulated and can tell you that it sounds pretty awful for the whale shark with anywhere from 50 people upwards swarming around it.

We were only allowed to swim along the side and behind its fin so that it couldn’t see us. And even with 10 people ( 5 on each side of it), it was crowded enough.

This limit means that you’ll have a better experience and there are minimal disruption toe shark’s swim and migration. 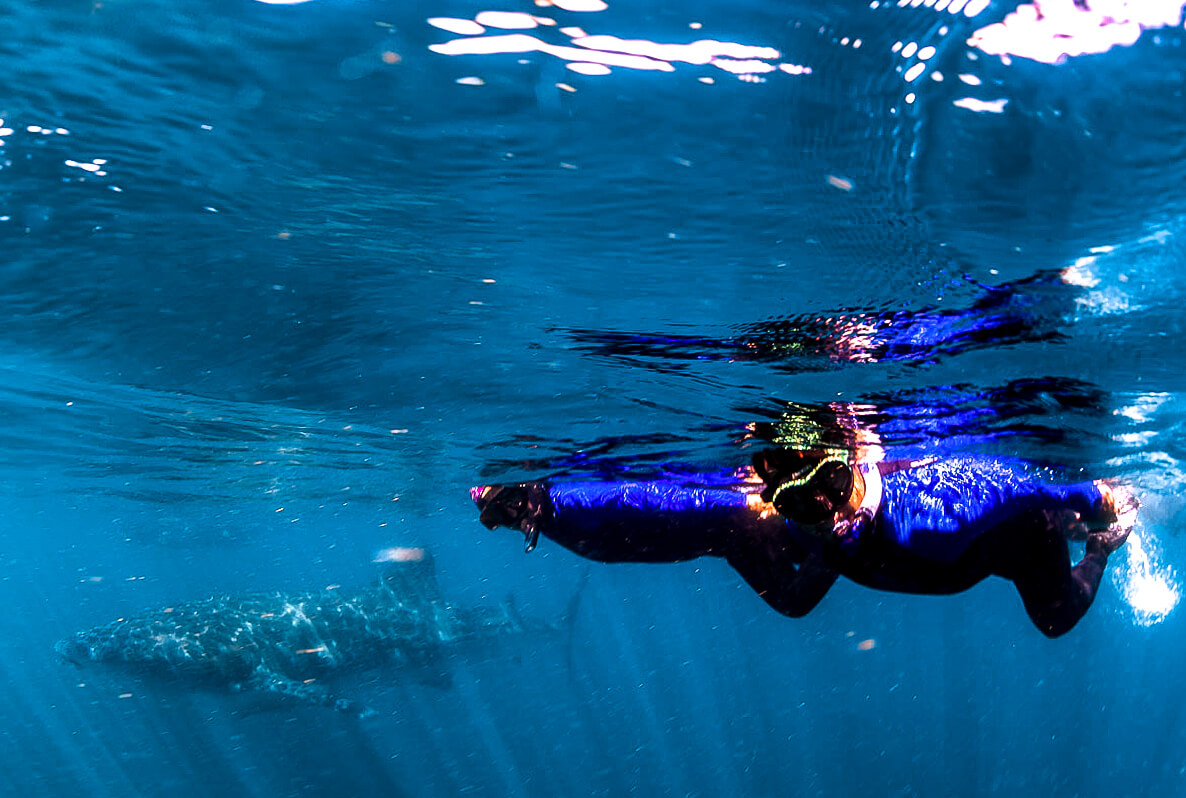 I’m sad to say that 5 years ago I visited the Okinawa Churaumi Aquarium when I was in Osaka, Japan. At the time, I was very ignorant to the destructive nature of poor animal tourism and how vital eco-tourism is.

The aquarium there is famous because it has a whale shark in its tank. I remember thinking at the time “this place is huge, the whale shark has so much space.”

What I now know is that despite what to me seemed like a lot of space, it isn’t enough for a whale shark. As a migrating species, whale sharks like crossing vast distances and typically live 100-150 years in the wild. From 1980 to 1998, a study of 16 whale sharks kept at the Okinawa Aquarium found that, on average, they survived 502 days in captivity.

5. You also get to snorkel and enjoy the rest of the Ningaloo Reef

Our tour with Ningaloo Discovery included a few additional snorkelling opportunities. When the crew spotted some manta rays, we all jumped in and swam with them. Later in the afternoon Daniel and I saw a blue spotted stingray, 3 reef sharks and heaps of tropical fish. So really, you’re paying for a whole day out on the boat, snorkelling AND swimming with whale sharks.

6. Getting to Coral Bay or Exmouth makes for an awesome road trip

Coral Bay is 1,100km and Exmouth is 1,250km from Perth. We did our swim with whale sharks in Exmouth because there is a lot more to do and see in the town and within Cape Range National Park. Between Perth and Exmouth, you have plenty of awesome stops offs like Kalbarri, Geraldton and Shark Bay. Make a 1 – 2-week road trip out of it and escape Perth’s winter. Do it. Ps. It’s is a massive country to make sure you plan your trip to Australia carefully!

So you won’t be sitting on a boat aimlessly searching around for the shark. Most companies offer a sighting guarantee so if you don’t get to see a whale shark, you’ll get another booking for FREE!

All tour operators pay a licencing fee to the Department of Parks and Wildlife which then goes towards further research on whale sharks. Many tours also have marine biologists and researchers on board so there’s plenty of information available for you to learn more about this awesome fish.

So, what are you waiting for? Book your swim with whale sharks now!

It’s incredible to fathom being alongside an animal 3-4 times my size and feel completely at ease and perfectly safe. This is by far one of the best experiences of my life and I am stoked to have done it in Western Australia.

So please, if this is on your bucket list (and it should be), do it in the Ningaloo Reef!

Psssst… who should you do it with?

Ningaloo Discovery is the only company that has a catamaran which is supposed to help if you get seasick. Daniel gets horrible sea sickness so this was a no-brainer for us. We had a blast on board with the crew who were all just as passionate as they were knowledgeable about the ocean. Check out Ningaloo Discovery’s website for latest prices and to book your tour.

Heading further up north? Check out some more things to do in Alice Springs and Central Australia. 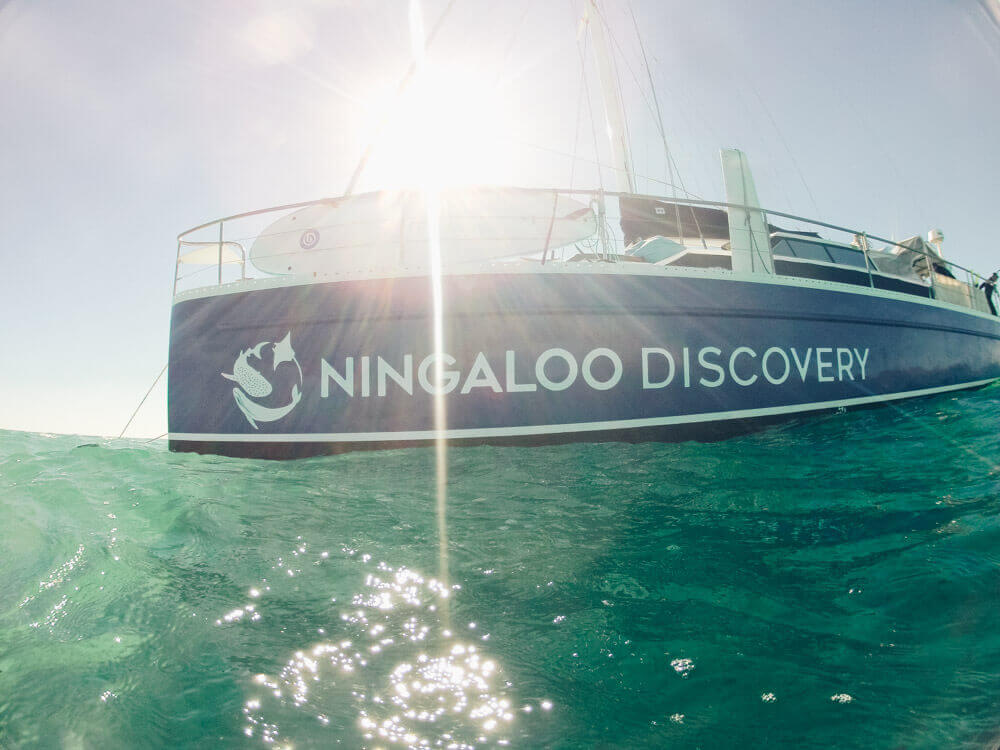 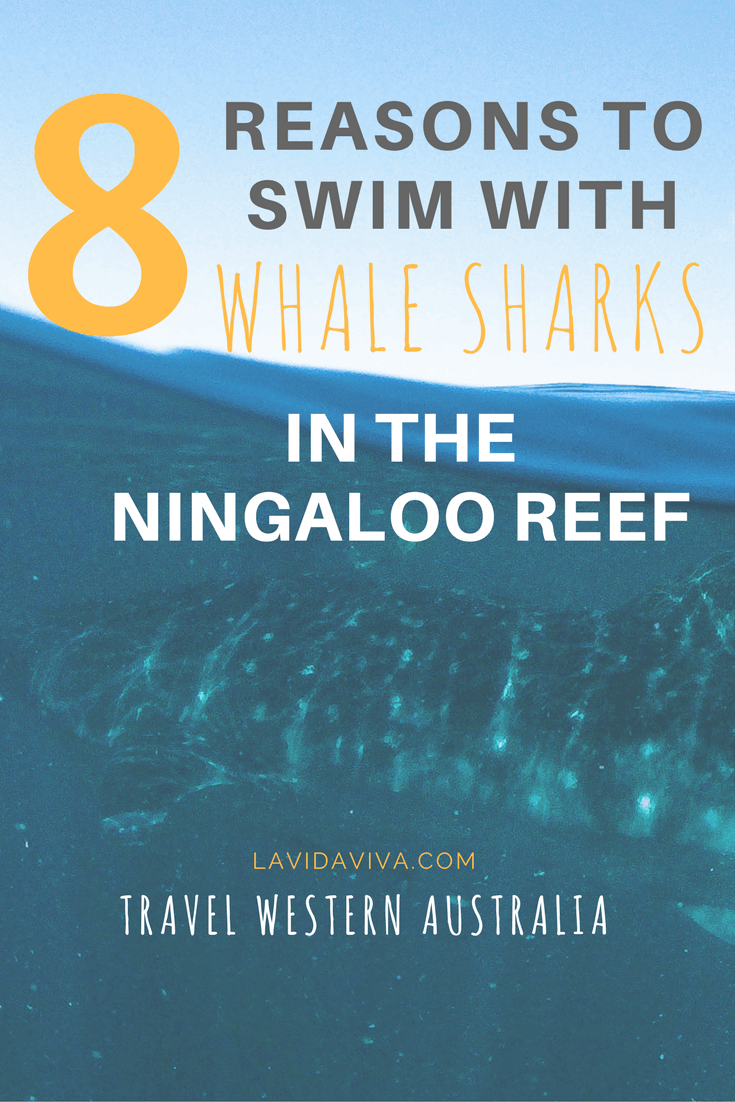 Disclosure: We received a discount from Ningaloo Discovery but our opinion and recommendation is completely honest and our own.

18 thoughts on “8 Reasons to Swim With Whale Sharks In The Ningaloo Reef, Australia”