Kuang Si Falls in Laos: Everything You Need To Know 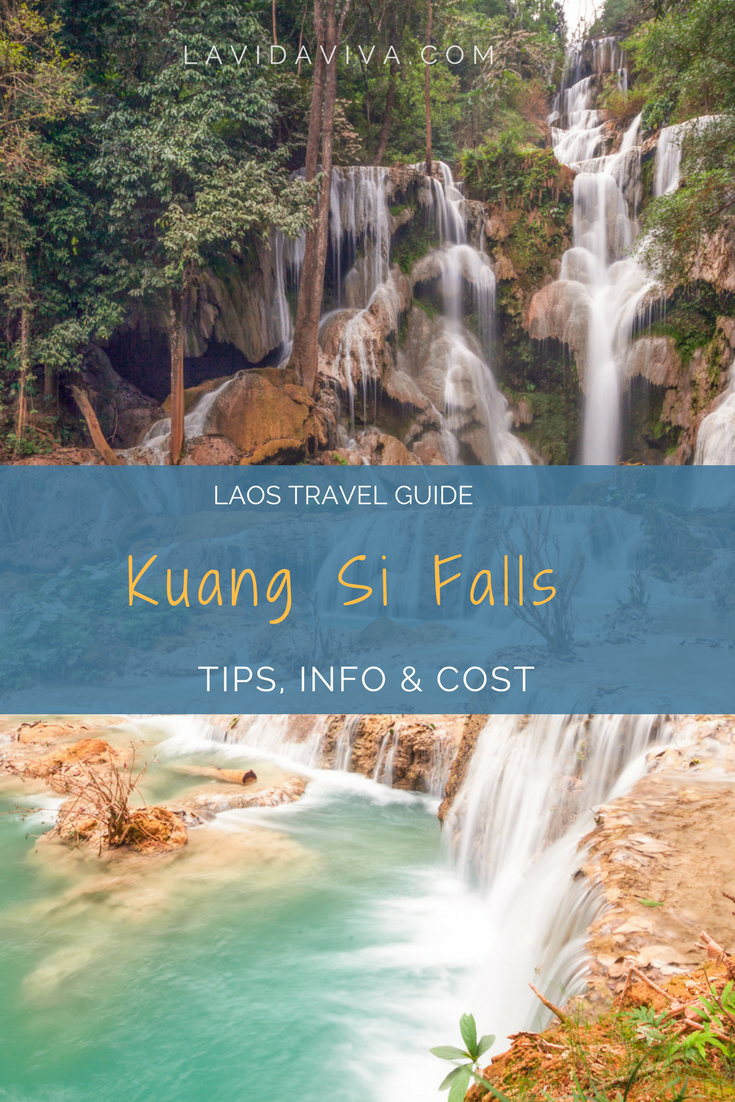 Kuang Si Falls is the absolute highlight of Luang Prabang. Nestled in a jungle with cascades flowing from the top of a mountain, it’s a nature lover’s and photographer’s paradise. Like Kawasan Falls in the Philippines, these falls form turquoise pools where you can swing, swim and selfie.

Where is Kuang Si Falls?

Check out this post if you’re wondering what to do in Luang Prabang with kids since we definitely can’t help you on that front!

Getting to Kuang Si Falls

Located approximately 25 km from town, you have a few different options to get to the falls depending on your budget.

A tuk-tuk (auto rickshaw in South East Asia) can transport around 8 passengers at one time (depending on how tight the squeeze is). You’ll find plenty of shared tuk-tuks heading to the falls if you ask around the main street in town. Tuk-tuk drivers will round up as many passengers as possible before departing and will likely drop off / pick up other passengers on the way.

If you’re staying at a hostel or travelling in a group, you’ll have more bargaining power to ask for a discount as a collective group. Also, don’t be surprised if you get kicked off a tuk-tuk and asked to get on another. The drivers and touts tend to work together and will load up passengers to fill up a tuk-tuk. Just roll with it!

When asking for prices, make sure you ask for a return price and pay half of the money first on arrival. Although it’s unlikely that your driver is going to drive off and leave you behind to find your own way back, it’s just less complicated and risky. We had a group of 5 and negotiated a price of 60,000 kip per person for the return journey.

Read more:
Guide To Salento, Colombia: Everything You Need To Know

The downside of a shared tuk-tuk is that you have to collectively agree on a time in advance to return to the tuk-tuk.

Note: even though it’s expected that you will barter the price, please bear in mind that fuel is quite expensive in Laos and the difference of say 2,000 kip is only $0.25 USD or $0.31 AUD. As someone who enjoys bartering, I have learned to let go of these small differences that are less of a loss for me than locals.

Another option is to hire a private tuk-tuk to take you there and back. The benefit of a private tuk-tuk is that you can arrange a return time based on what you want and don’t have to worry about the rest of the group as you would in a shared tuk-tuk. If you have enough people to fill a tuk-tuk, this is the more economical option.

3. Hire a motorbike or scooter and take yourself to Kuang Si Falls

If you’re going for this option, please ensure that you are properly licenced (and hold an international driver’s licence) and are adequately insured adequately insured. A scooter in Laos will set you back around 60,000 kip ($9.50 AUD  to $7.50 USD) plus fuel. The road to Kuang Si Falls winds up around a mountain and you’re going through a fair bit of traffic so if you aren’t a confident and experienced rider, we don’t recommend this option. 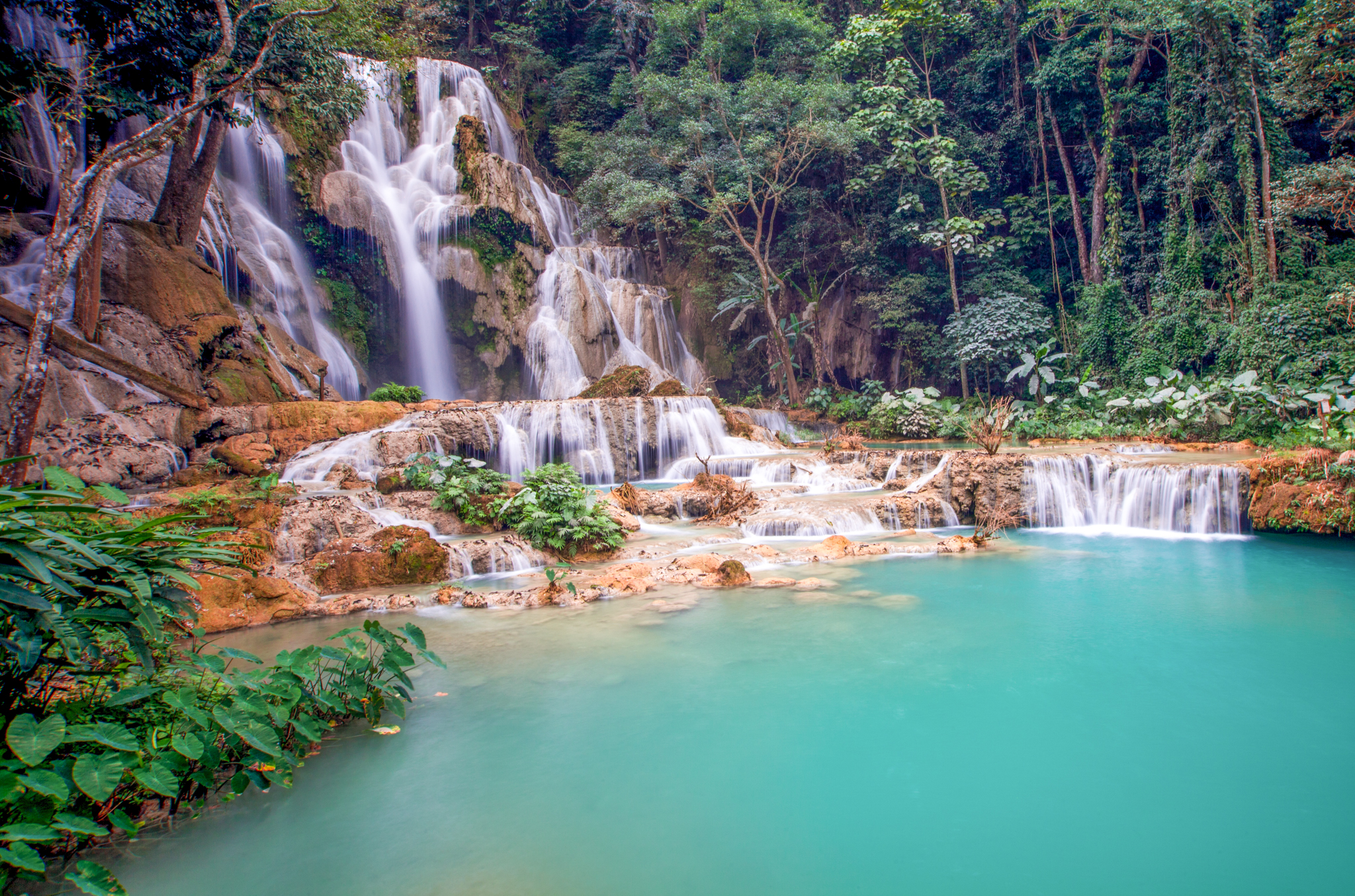 Payment of the entry fee gets you access to the Tat Kuang Si Bear Rescue Centre which is a sanctuary for rescued Asiatic black bears (sun and moon bears). The bears are illegally hunted for the paws and bile. An Australian charity, Free The Bears Fund Inc. operates the rescue centre and any donations given by visitors are used to take care of the rescued bears.

The centre is fantastic for raising awareness, particularly to Asian nations that are the main culprits for the illegal hunting. If you visit around 1 pm, you may catch the feeding time and watch as the bears search around for their food. Each day, food is hidden in different spots so that the bears have a necessity to hunt for it. This stimulates them, keeps them active and helps prevent boredom. You can also see the bears chilling and playing around in the enclosure. 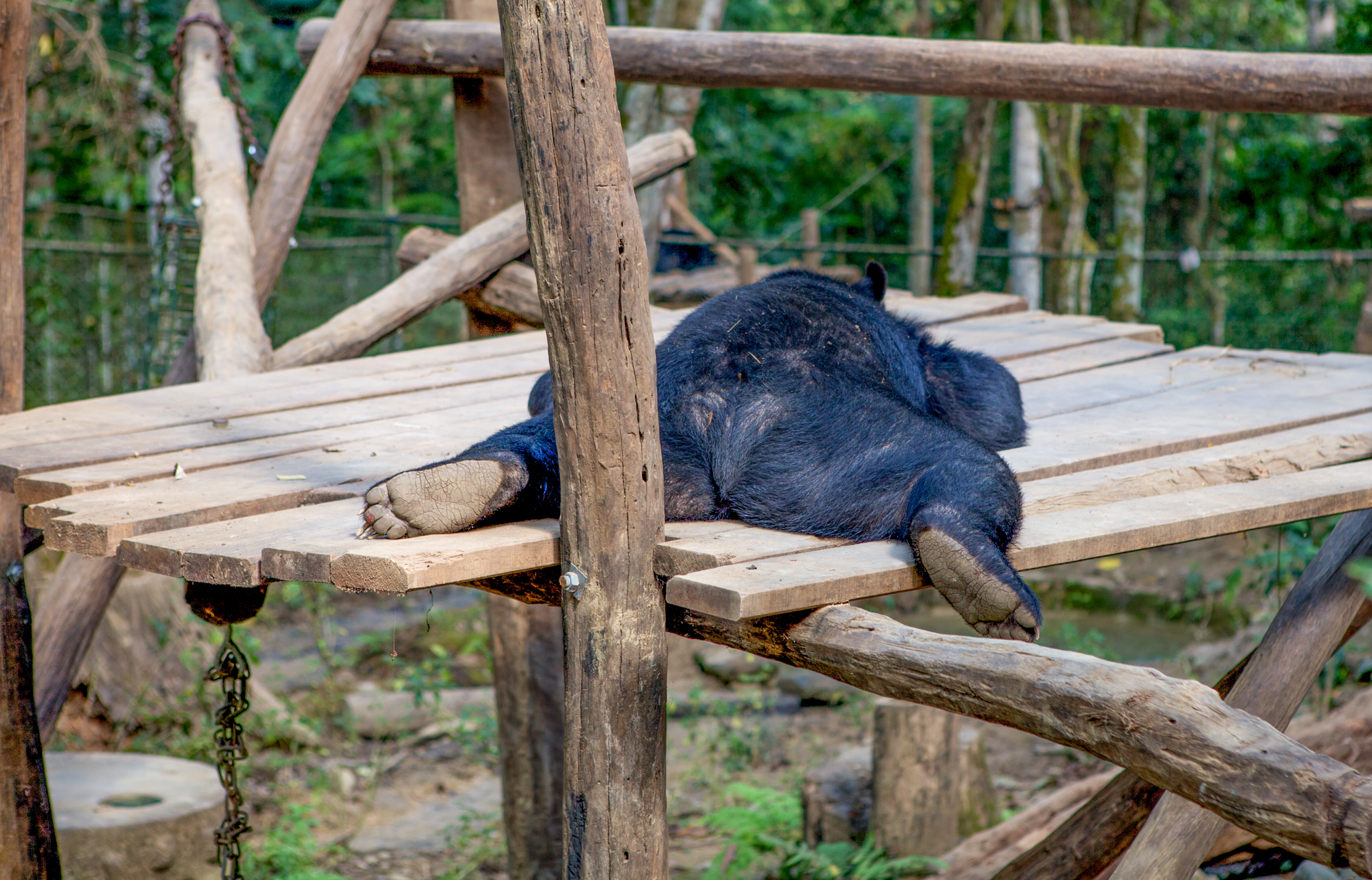 While we aren’t fans of animal tourism, we don’t believe that the rescue centre is exploiting animals for tourism. The purpose of the centre is to rescue trapped bears that would otherwise be repeatedly harvested for as long as possible. Please ensure that you research any forms of animal tourism before participating.

Note: Funds from entrance fees do not go towards the rescue centre so consider donating if you would like to support the centre. 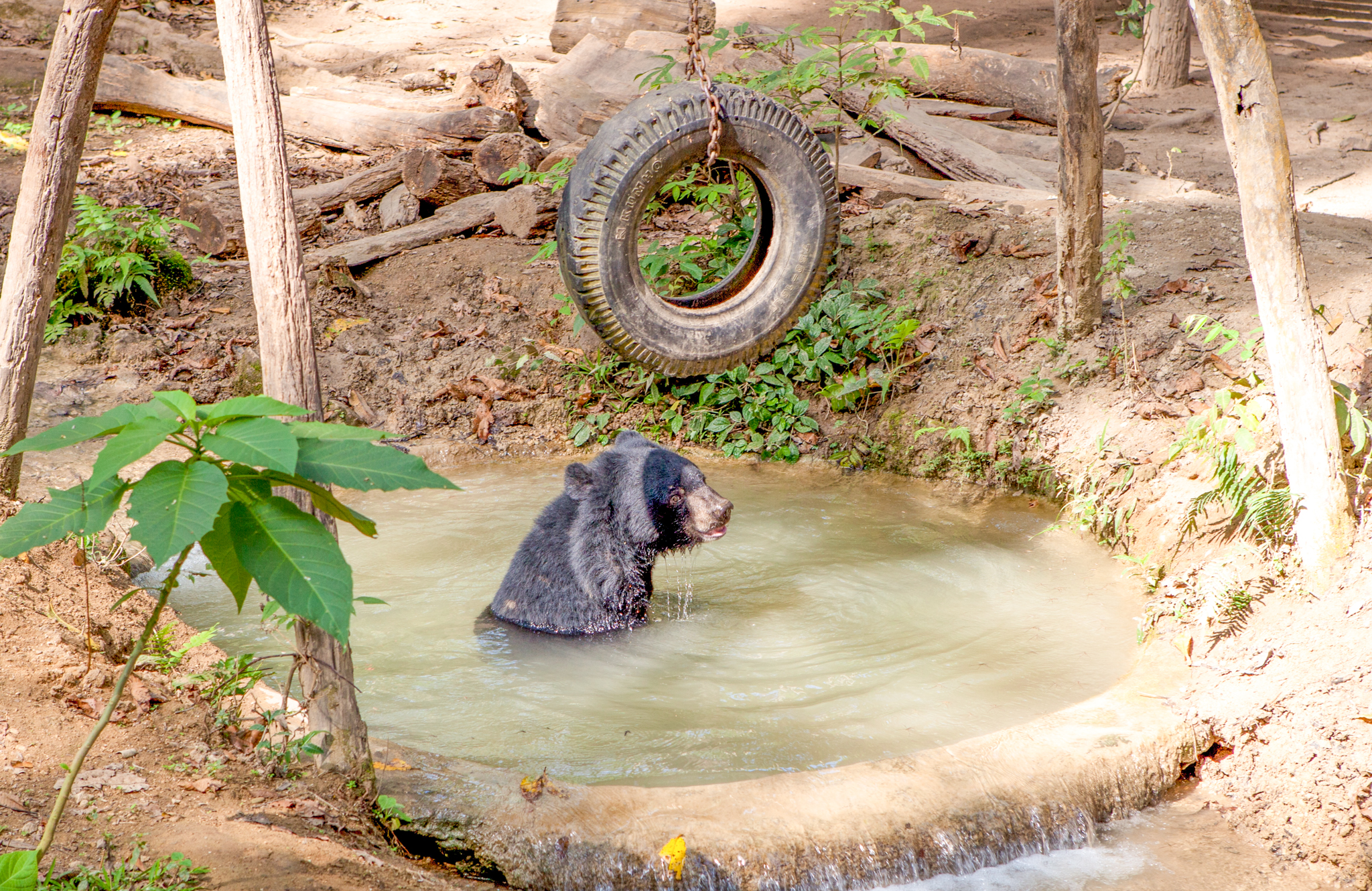 When is the best time to visit Kuang Si Falls?

The best time to visit Kuang Si Falls is a couple of months after the monsoon season when the pools still have a lot of water and the turquoise colour returns. This is around November or December to April or May. We went to the falls in February and they were perfect! To avoid the crowds, don’t go on the weekend and get there as early as possible.

Read more:
Kawasan Falls: Complete Guide to Getting There Without the Crowds 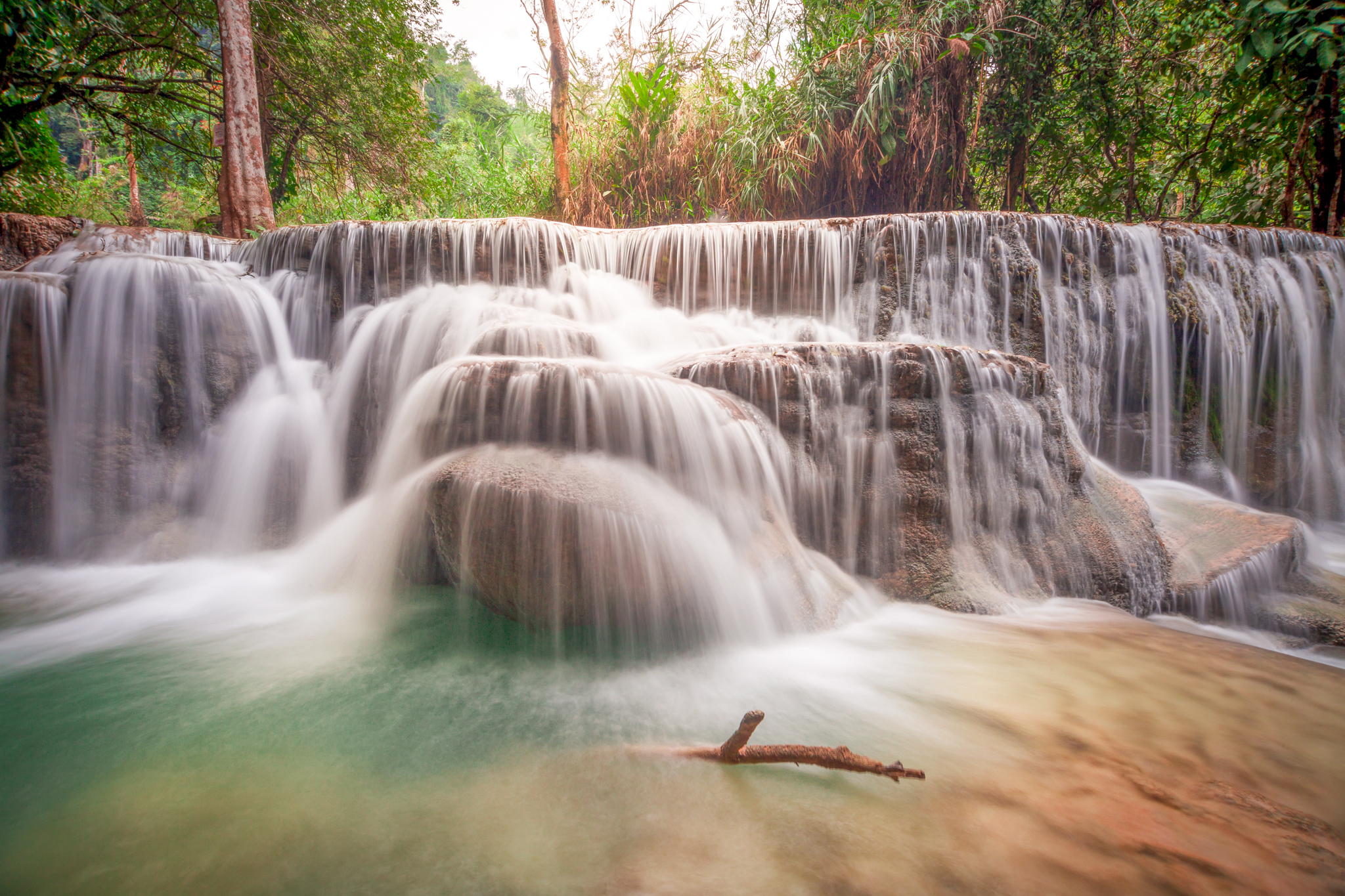 Should you swim in all the pools?

No. Despite what some popular Instagrammers might put out on display, some of the pools are considered sacred. As a guest in another country, we cannot condone disrespecting such traditions and customs, particularly when there is clear signage to advise that the area is sacred that people should not swim.

There are plenty of different swimming areas with clear signage so please, do not jump into a forbidden area for the sake of the gram. Don’t be that guy. 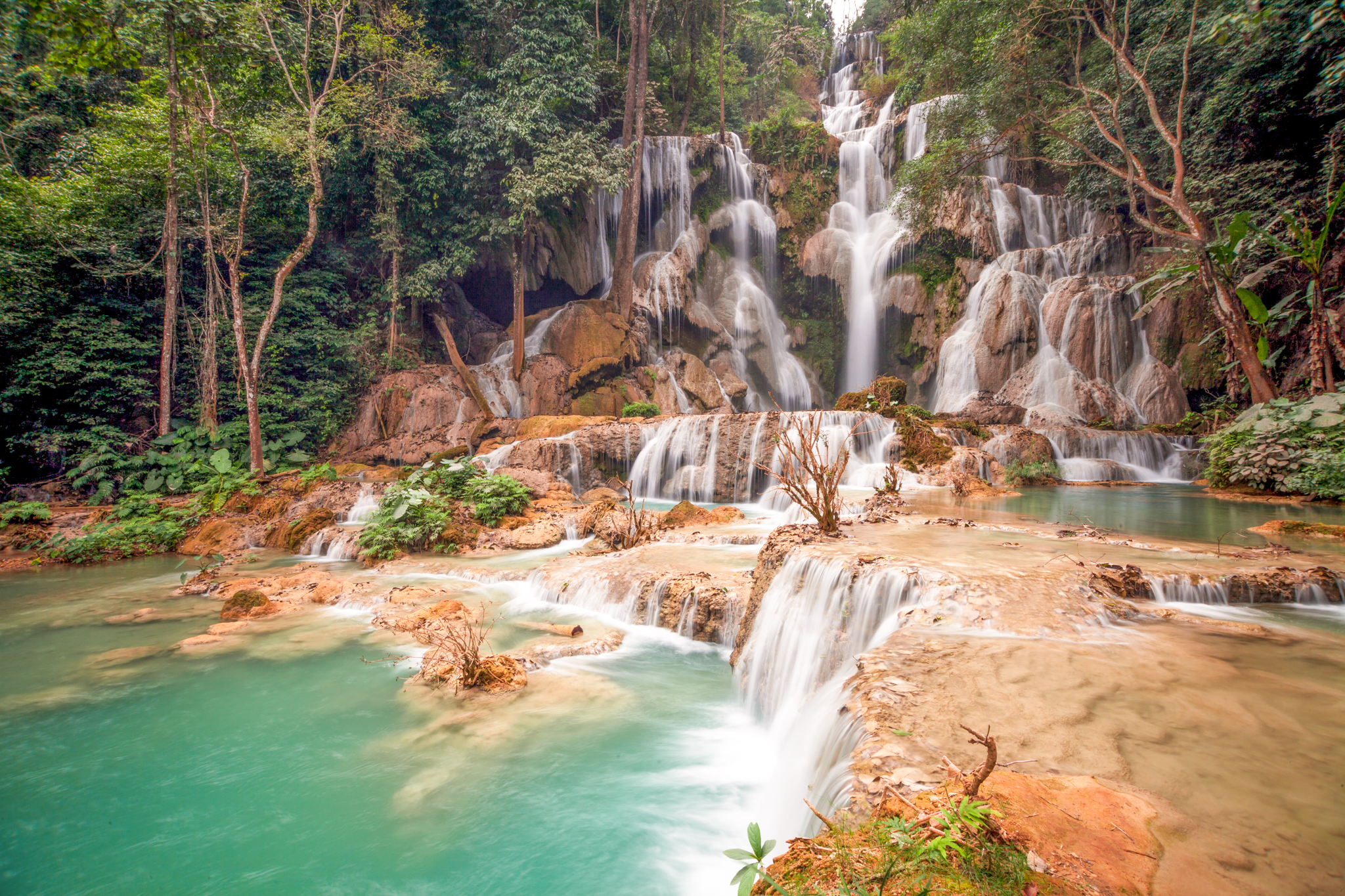 How long do you need to spend at Kuang Si Falls?

We spent around 2.5 hours here but could have certainly spent longer. We recommend around 3 – 4 hours. There is a nice hike that takes you above the waterfalls to some additional pools and a stunning lookout. The hike is quite steep and depending on the season, may get quite slippery. If you’re taking a tuk-tuk, make sure you discuss timing prior to departing from Luang Prabang.

What do you need to bring?

There are no lockers to keep any valuables so keep this in mind if you’re bringing a non-waterproof camera and planning on swimming. Exercise usual precaution – there are big crowds of people so don’t be careless with your belongings.

Did our post help you with your travel plans in Laos? Let us know or ask any questions in the comments below!

3 thoughts on “Kuang Si Falls in Laos: Everything You Need To Know”